Stopped into DessertCrazy the other day to sample a few keto food items. For those that don’t know, DessertCrazy is a Keto Bakery in Philadelphia, PA and a place I frequent to on occasion.

Several years ago, Dessert Crazy Founder, Candice Conway,  was diagnosed with being prediabetic. It took her by surprise, as I she was only 6 lbs over her healthy BMI at the time.  Having seen her uncle suffer horrible side effects from type II diabetes, she said “no way” and found the keto diet, and realized it would help her.  She was also heartbroken. She loved baking her whole life, and to not be able to eat or bake wonderful goodies seemed like torture.

She decided to try keto baking.  At first, it was a disaster. Most of her early attempts were spit-it-out bad.  She wasn’t about to give up though, she knew it had to be possible. At that point, she started doing research into the food science of keto.  It wasn’t too long a stretch, since her background is in science. She has degrees in biology and chemistry, and she did her graduate work in biology.  On top of that, she has worked in a number of bakeries and had her own business as a freelance pastry chef. If anyone could figure it out, she should have the background to do it!

As her goodies got better and better, she started to realize that she had a much easier time of doing keto. She didn’t feel deprived. She heard a number of people say that they would love to try keto, but they weren’t willing to give up baked goods.  She realized that there was something missing in her beloved city, Philadelphia. There was no dedicated keto/low carb bakery. She felt she needed to share her creations with all her neighbors.  In addition, many homes in the U 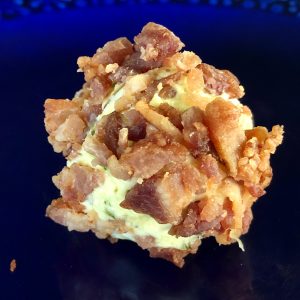 SA have no access to keto baked goods. She’s adding mail order so they can be happy with their keto lifestyle also.

She was also frustrated with how few keto products she could find to buy locally.  She’s adding a retail section to the shop, with all sorts of hard to find keto items.  Since other people are creating wonderful new keto products, she’s going to have many of them for sale also, such as Keto Ice Cream from Killer Creamery.

The best news for her?  Her A1c was perfectly normal, and she’s at healthy weight.  All while eating cupcakes!

Below are the ingredients to the Bacon, Egg, & Avocado Fat Bomb

I tried three savory keto fat bombs in the store. The Bacon, Egg, Avocado one was my favorite. The consistency is perfect. It has some firmness from the egg and the bacon around the outside is absolutely perfect. The bacon is not too soft but also not too crunchy. So you can a firm yet soft fat bomb that’s super bacon and egg like. It’s absolutely delicious and only 1 net carb! I highly recommend you go out and try this!!

Keto Lion is the #1 Keto review website. We provide honest keto reviews so you can learn how to shop, eat, and live well!